“A deaf writer who retreated into the woods to live a solitary life must fight for her life in silence when a masked killer appears at her window.”

I absolutely love the horror genre because it gives me a unique thrilling sensation of it’s own and it’s rare to see a film that is both clever and spine chilling such as this one. Let’s get started! 🙂

I loved the story of this film. HUSH was a simple cliché intruder film, which reminded me of The Strangers, but what matters is how it was executed. I thought this movie was very engaging and cunning. The majority of horror films that are released nowadays resort to this formulaic pattern consisting of sloppy story-telling, horrible character motivations/choices, and the most annoying–jump scares. I don’t recall this film having an overload of jump scares because it didn’t need it; it accomplished its number one goal which was to get under my skin.

The main character (played by Kate Siegel) was fascinating to follow through the perspective of her narrative considering that she was both mute and deaf. I’ve never seen a film focus on a character with both those disabilities and they made it so dang interesting. She was a character that finally made smart authentic choices in her horrific situation which I rarely see in a horror film. She outsmarted me because I actually would have had no idea what to do in her situation. What I really loved about the film is that it included sequences of what could she COULD have done that the audience would most likely do logically, but they showed her processing that the worst outcome would actually occur if she made those choices and taken that route! She was a great character that I felt a connection towards; I actually cared about her well-being. The ability that she had to express fear and give a performance with only gestures, face, and eyes throughout the entire movie was so impressive.

The antagonist was AWESOME! The killer (played by John Gallager Jr.) was such a great character because he had personality. There was something eerie about his performance because he gave an indicator of how disturbed his character’s mental health was. Through dialogue and subtle speech/movement I was scared to even think about being in a house alone with him near the neighborhood. You may or may not discover his motivations, but in those situations are there always explanations as to why some individuals may be psychopaths…maybe..maybe not, you’ll have to find out! I had no idea until writing this review that he was the actor that also starred in 10 Cloverfield Lane. I’m really good at recognizing actors and throughout my experience watching Hush, I was so captivated with his performance that he was unrecognizable.

It’s no surprise to me finding out that Mike Flanagan, director of Oculus, also directed this movie. He understands the themes of true horror and beautifully translates it through his filmmaking with creative tone, music, and clear vision for his stories. This movie is simple, but the atmosphere felt huge due to his main theme which was silence and isolation. I interpreted that the underlying theme for this film is that isolation can be an emotional threat, a slow silent killer (parallel to killer). Those individuals in need of help that push themselves away from others have a difficult time communicating and listening (reflection to protagonist)  to others that may or may not try to help. Isolation can possibly lead to depression and self-harm and that’s what I interpreted from this film which I thought was expressed in a genius way through the story, direction , and characters. Bravo to this director for creating a frightening environment with an important theme, and concise/focused story. 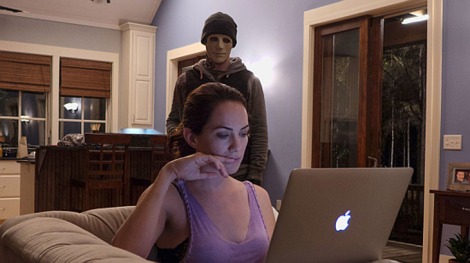 Overall, this film was EXCELLENT Great performances, amazing direction, terrifying tone, important theme, eerie environment, and clever motivations! This is a great addition to not only horror films, but to cinema itself. I didn’t love this film, but personally, it was incredible filmmaking and I didn’t have any problems with it. I’m so happy I got to see this movie and I totally recommend it to everyone! Check it out on Netflix. Thank you for reading! My rating for this film is 9/10! 🙂