“When a young boy disappears, his mother, a police chief, and his friends must confront terrifying forces in order to get him back.”

I kept hearing about this show consistently across social media, articles, and friends saying it’s fantastic and possibly the best television show this year. I definitely had to check it out considering the word of mouth was extremely positive. Thank goodness for Netflix they had it streaming online for me to binge it and enter the new world they had to offer from their original content. Let’s get started! 🙂 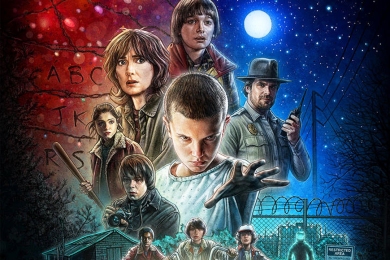 I really loved the story. They used a simplistic narrative with the disappearance of this child Will Byers within this small normal town of Hawkins and managed to expand that idea with supernatural forces implemented. With this direction, the show was able to keep me engaged the whole time wanting to move on to the next episode to unfold the mystery of this bizarre occurrence. The unique journeys of the characters and how they all deal with this loss was very intriguing and compelling.

Everyone in this show did a really awesome job of bringing the atmosphere, suspense, and characters to life. I did enjoy some of characters and their perspective on the unusual disappearance more than others, but that doesn’t mean the others still didn’t deliver great performances. As an ensemble this cast was excellent and is the main reason as to why this show was solid.

The standout performances for me and also my favorite characters were David Harbour as Chief Jim Hopper, Winona Ryder as Joyce Byers, and Millie Bobby Brown as Eleven.

David Harbour was my favorite character because I found his path in the show to be the most gripping. He gave an amazing performance as the officer who was skeptic and very reserved making him a wonderful counter to Winona Ryder’s character who was more proactive and delusional. It was exceptionally rewarding to start connecting the dots with this character as the show went along.

Winonna Ryder can act like there’s no tomorrow. It’s been over a decade now since she was Babe Bennett in Mr. Deeds which I really enjoyed her in.  Last time I saw her in a role was Star Trek as Spock’s mom, but unfortunately they didn’t use her that much. Recognizing her here, I had no idea what to expect from her role or acting capability. She did a phenomenal job as a Mom who really believed she could find her son. I could feel her concern, I could feel her pain, and I could feel her hope which is why I was so invested with her. Some of the scenes she had were beautifully elaborate. The emotions and dialogue that she expressed felt so valid and to me she gave the best performance in the entire season. 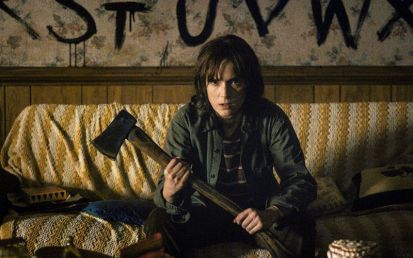 Milly Bobby Brown as Eleven gives a breakout performance. There was something very iconic and distinct about this character. Eleven doesn’t say much, but it’s all in the eyes and facial expressions. Milly gives so many layers and depth to Eleven that almost help comprehend the suffering she has gone through. It’s almost like the one shot of Rocket’s back in Guardians Of The Galaxy, one visual of his back and it tells us so much. Same goes for Eleven with her interaction with others. Also, the addition of a certain talent she has reminded me of Jean Grey which is awesome! I do wish we got to see more from her experiences, but maybe less is more in this case. Eleven really made me want to eat some waffles because man does she love some waffles herself.

Let’s talk about that soundtrack! The music for Stranger Things was amazing and effective which gave it an aesthetic of it’s own. This is not the first time I’ve heard this brilliant synth music inspired from John Carpenter’s work. You can also find masterful music like this incorporated in the film It Follows and the film The Guest which I definitely recommend you all to watch. If you loved Stranger Things you will love those films.

Let’s talk about some nostalgia! Stranger Things was filled with references and homages to the classics of the 80’s. These are all the references I noticed with my viewing, I noticed Aliens, Close Encounters of The Third Kind, E.T, The Thing, Minority Report, Nightmare on Elm Street, The Goonies, Jaws, Poltergeist, Stand By Me, Under the Skin, and The Empire Strikes back. That’s all I was able to catch, but I’m sure there are several I missed. It was very awesome to see the influences of Steven Spielberg, John Carpenter, Guillermo del Toro, and Stephen King come together on the small screen to remind us that some adventures of the ordinary can meet the extraordinary. The thing is when I would recognize the homages I would be thinking about those specific films, for example, Stand By Me and how I thought the dynamic between those kids was better than the ones in Stranger Things. It’s okay to take inspiration, but when I’ve seen something so similar done not as well, that element such as the kids on an adventure becomes just alright. 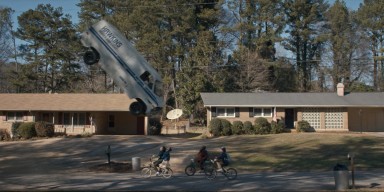 The only negative I would say I had with the show was the abundance of nostalgia. I felt the show relied heavily on the material and work of the 80’s that it wasn’t able to be it’s own thing. Don’t get me wrong, it was awesome to hear those star wars references, but after hearing it for about maybe an 8th time it became a little distracting for me, making me think they kept using those references because ,”hey everyone you like star wars so star wars it’s cool!” Because of the blunt similarities they had with E.T. and their focus on the homage, I feel like they missed an opportunity to dive into their own mythology that they created.

I felt some specific elements were identically replicated which bothered me a little and an example of that would be this scene with this scene from Under The Skin. They are used completely different, but I felt they should have looked different as well to allow me to fully connect with this new environment and maybe have a jaw dropping moment rather than, “hey this exactly like under the skin.” Their mythology was innovative, but they briefly focused on that, maybe we’ll see more in season 2!

I thought this show was really good! The story kept me involved, the characters and performances were exceptional, the music was superb, and the nostalgia is wonderful, but I felt it was a little too much. The show did what it needed to do, it opened up a world for possibilities, there’s so much potential I can feel it, I just have no idea where they will take it next season. It’s hooked me and I can’t wait for some more Stranger Things. My Rating for this show is 8/10 🙂

2 responses to “Angel’s Review of ‘Stranger Things’ (No Spoilers)”