This is Star WARS.

This is the story of Jyn Erso(Felicity Jones) and a squad of rebellions led by Cassian Andor(Diego Luna) to steal the Death Star plans setting up the events of A New Hope(or rather the original Star Wars).

Right from the get-go there are plenty of Star Wars fan service and references in the film. It’s very hard to miss them if you’re invested in this universe as any other Star Wars fan. However, if you’re a newbie, it may confuse you and some of the new/younger viewers.

At this point, it’s no secret that Darth Vader is in the film. He’s not in it a lot, but he scenes are quite memorable. He absolutely wrecks the rebels when he invades the Tantive V ship and it’s quite frightening as he tears through a squadron of rebels with absolute ease, blocking every shot with his lightsaber and using his force powers to take them out. 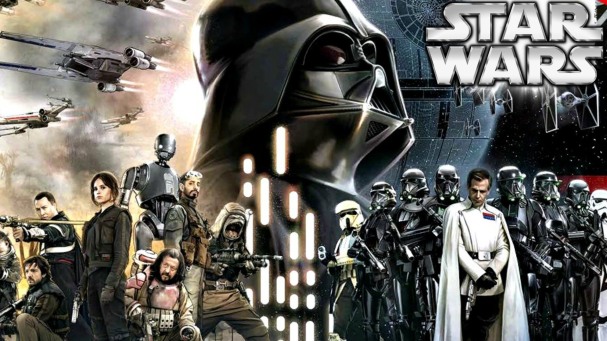 The late Peter Cushing’s iconic role of Grand Moff Tarkin returns to the big screen, as director Gareth Edwards and ILM digitally recreated the actor. One could say this is disrespectful, but is it truly? Tupac was a hologram at a coachella concert, and there are plenty of celebrity impersonators, impersonating other dead celebrities. Paul Walker who recently passed in a car accident three years ago was also digitally recreated to send off his character in Furious 7. Marlon Brando’s Jor-El was brought back for Superman Returns. The actor’s estate more than likely provided the green light so they certainly wouldn’t have a problem with it. The point is, controversial or not, Cushing himself and his character has been immortalized on film. I don’t have a problem with this as long as it’s not overused and only used to serve the film.

Princess Leia returns to the screen as she is completely CGI in the film. I will admit the digitally rendered faces were distracting in certain scenes, especially Tarkin’s but I will say that the de-aging technology is just one step away from being perfect.

The pacing is slow. It did take a lot of time setting things up and getting things in place for the final act to unfold, but when it unfolds, that’s where it all pays off. While the references are neat, it’s all the film relies on to keep the slow set up entertaining. I also did find Forest Whitaker’s Saw Gerrera to be a bit over the top. He doesn’t have much screen time at all to be honest so his exit didn’t mean much to the film. For those who watch the Star Wars Clone Wars and Rebels animated series might get a kick out of his character, but for those who don’t might not even care.

The main spotlights in the film are Felicity Jones and Diego Luna. With these particular Star Wars characters, they have a lot of emotional baggage. The weight on their shoulders are felt through and through as they’ve made choices that they’re not proud of, particularly Cassian who’s been in the fight since he was young and every hard decision he’s made, he made for the rebellion. The absence of Jedi in the film also gave Star Wars a new outlook. It proves that a Star Wars movie without the Jedi can be made and be made well.

Other supporting cast members Donnie Yen, Wen Jiang, Riz Ahmed, and Mads Mikkelsen do their job competently. Ben Mendelsohn does an excellent job portraying Orson Krennic, an ruthless and ambitious Imperial Director, responsible for apprehending Mikkelsen’s character Galen Erso the father of Jyn, forcing him to create the Death Star. Alan Tudyk’s blunt and unnecessarily honest droid, K-2SO brings a lot of humor into the mix, providing the right amount of levity in a bleak film. 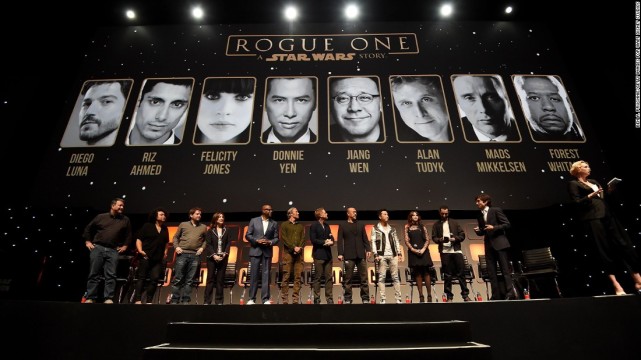 Not all of these characters have a lot of screen time, but Gareth Edwards uses them effectively to serve the plot, making you care about them as the story unfolds. With that being said, if you’re a Star Wars fan, you saw their deaths coming, but because the script treats them as real characters for the most part, instead of fodder it is upsetting to see them die. You truly feel what’s at stake. I applaud Kathleen Kennedy, Gareth Edwards, and Disney, they were not afraid to pull any punches. This is a war film, and in war, not everyone lives. Sacrifices have to be made.

Rogue One is a more “grown up” Star Wars feature. It’s darker, more dry on humor, more violent, and morally ambiguous. But most importantly, it a breath of fresh air because of it. It isn’t without it’s issues, but its a new outlook and a new feel to the Star Wars franchise. I look forward to more spin-offs. Puts actual war into Star Wars. 8.3/10