When I heard this movie was being made, I was optimistic and cautious. While following the hype train, I was happy to see that the film was being taken seriously. The only aspect I really disliked from all the announcements that were being made were the Power Ranger outfits themselves. Aside from that, everything else was pretty much on point.

Power Rangers isn’t the disaster I was hoping it wasn’t going to be. For the original fans out there, this movie just was not going to work with that campy tone similar to the television series. It worked for what it was as a television show for children such as myself back in the day. That just wasn’t going to translate well on the big screen, lets not kid ourselves. Plus the previous Power Ranger films that came out in the 90’s weren’t met with acclaim or did big numbers at the box office.

The film’s main problem is that it has an identity crisis, trying to be serious teen drama to an adventure filled sci-fi action film. Moments work here and there, sporadically. RJ Cyler is the bright spot as Billy the Blue Ranger. He’s the only one that really gives the group of teens a lot flare, and his autistic side is portrayed with respect. Dacre Montgomery, Naomi Scott, Ludi Lin, and Becky G are all given something to do. Montgomery’s Jason is the once promising athlete turned screw-up and the team’s leader. He almost finds redemption in the film given his responsibilities as the Red Ranger. Scott’s Kimberly finds a new home when she’s kicked out of her own click in school. Lin’s Zack is an outcast who acts tough, but that’s just to hide his fears and insecurities. Becky G’s Trini is also an outcast loner who comes to accept herself, her coming out is handled with care and treated with respect like Billy’s autism. The cast actually is not too bad either and for the most part deliver with their performances. The film tries to give them all layers and it can be engaging, even if it is a Breakfast Club ripoff.

Bryan Cranston and Bill Hader are great. Even as a child, I’ve hated Alpha-5 since the original show premiered and here he’s a little less annoying thanks to Hader’s performance. Cranston’s Zordon has more to do that tell the Rangers who their up against. He’s got personality and also has ulterior motives. 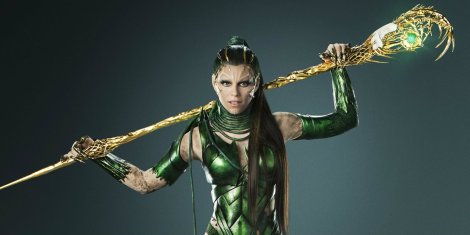 The weak link is Elizabeth Banks as Rita. She looks like she’s having fun and cutting it loose to portray her, but she doesn’t do much outside of conquering the world like all typical villains do. We don’t really learn anything about her and why she’s doing what she’s doing. More screen time to develop her would have been nice.

At best the film plays out like an episode of any DC/Marvel superhero show on the CW or abc. The origin story is exactly what anyone would expect in an origin story. It can be tiring to sit through as the familiar tropes are extremely apparent and can get boring from time to time. Once it goes into high gear it gets fun. This is where the identity crisis also comes in play as it becomes a CGI, over the top action feast for 15-20 minutes. Despite it being fun to watch, it really never felt completely earned, the story never really positioned itself to actually feel earned. Also bare in mind there is a lot of Krispy Kreme promotion in the film. I’ve never seen a movie put that much promotion and devotion at all to any product.

Being a former Power Ranger die-hard, I cannot watch a single frame of any Power Ranger episodes at all, they’re all so terrible, but the nostalgia always stays. For a reimagining/homage it’s a step towards the right direction. But it’s also a jumbled mess. Should there be a sequel, I would hope it figures out what it wants to be. Also redesign the damn outfits they’re an eyesore. Less is more. All in all I’m happy that the filmmakers took the property seriously and I’m open to see what’s next.

Suffers from an identity crisis, but also sporadically entertaining. 6.8/10