Movie Description: “The world’s top bodyguard gets a new client, a hit man who must testify at the International Court of Justice. They must put their differences aside and work together to make it to the trial on time.”

I was disappointed with this movie. It starts off with Ryan Reynolds escorting an arms dealer to board a plane because he is the world’s greatest bodyguard. Moments later, he feels accomplished until his client is shot in the head. This event captured my attention and I was hooked to the narrative as it continues to follow the main character two years later during his career after being demoted. The main conflict is introduced when Gary Oldman shows up which was the most surprising part about this film. T Interpol agents’ response to taking this dictator down is having notorious hitman Samuel L. Jackson testify against him in the International Court Of Justice in exchange for the freedom of his incarcerated wife played by Salma Hayek.

I didn’t care about any of these characters and the resolution of their issues. The trailer got me so excited because I laughed really hard, but the rest of the comedy throughout did not work for me at all. The conflict of bringing the dictator down and the tension between relationships felt like two different movies with dissimilar tones that did not come together well. I was bored because the movie felt like it was dragging on. Some of the action was entertaining, but the CGI within it was bad. Reynolds and Jackson are finally in a movie together and that was taken for granted by the writer and director.

Gary Oldman was barely in this movie, but was the best part about it. I love seeing this man on screen transforming himself once again. He owns the role of a ruthless Russian dictator and burns up the screen.

Samuel L. Jackson had to be an obnoxious hitman and he nailed that, but it got annoying which is exactly how other characters felt towards him. It was a serviceable performance, I just never thought I would get tired of hearing Sam Jackson say the word “motherf**ker,” but I did.” Snakes On A Plane is better than this movie.

Ryan Reynolds is an actor who makes me laugh every time he’s on screen. He made me chuckle probably once or twice in this movie. His performance had to be more reserved because he played this uptight man who was obligated to stick to his strict rules, but I could see that he wanted to break character sometimes. It just didn’t feel right, it’s hard to watch when he is trying not to be Deadpool.

Salma Hayek was awful because she was miscast. I didn’t believe her performance as that incarcerated character. Some of her lines made me laugh, but the majority of the time it was cringe worthy and I really hate saying that. Everyone else was serviceable.

Is The Hitman’s Bodyguard a nice film to look at….not really, it was average. The cinematographer offered moments with cool style and color, but it got lost in the action set pieces of the film and the long comedic exposition. 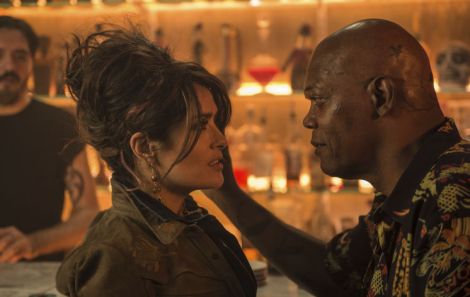 It was cliché and didn’t serve any purpose in the film to further the story or experience. They could have used any songs that were similar.

The lesson I got from this movie: Take a bullet for someone or take the blame, aka, self-sacrifice in order to help others or advance a cause

This movie is a movie to watch when you are feeling lazy and just throw on the screen. It did not deliver on the laughs, action, music, and story for me. The performances were just fine for this movie. I would not recommend seeing this on the big screen, wait for this on cable or Netflix. Thanks for reading my review! 6/10

2 responses to “Review: The Hitman’s Bodyguard (No Spoilers)”